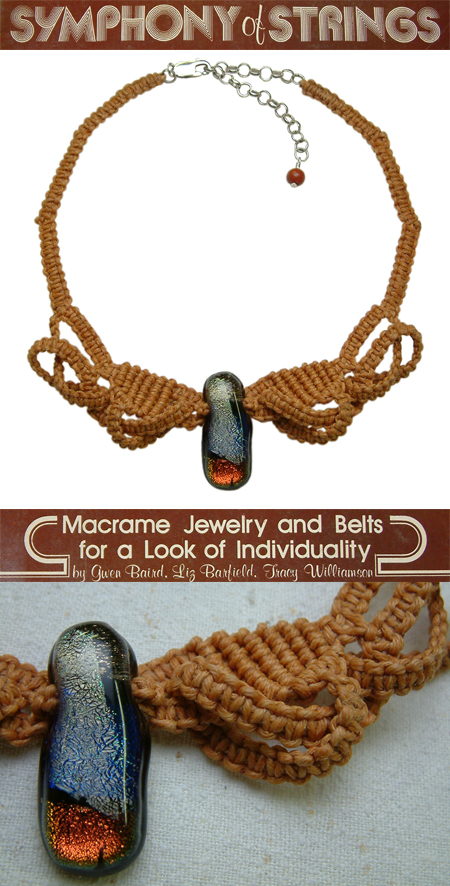 I’m always on the lookout for old macramé books and pamphlets on ebay.  Of course one could re-create the original designs, but with a little imagination it’s not hard to update these once groovy designs into something you’d love to wear in the 21st century.

Looking through “Symphony of Strings” (1976) one design in particular caught my eye because it doesn’t lie flat but rather loops around itself in a sculptural way. In fact it’s called “Looping Collar”.  For this necklace I made three modifications to the pattern.  First, I shortened the center width because I had a much narrower focal bead.  Second, I wanted to add an adjustable length clasp.  Third, I wanted the back to curve gently so that it lay smoothly on the back of the neck.

The dichroic bead was purchased at a gem show a few years back. It’s not very colorful but it fits my mostly black wardrobe. The pattern calls for 18 yards of small diameter waxed linen. Small diameter probably means a 3 ply, but I used what I had on hand and I loved the results.

About the cord, I used 7 ply Crawford Irish Waxed Linen in butterscotch.  There’s a comment on waxed linen in the book which states “This is a particularly good type to use while you are learning because of its superior workability: it is small and well finished, sheds little, holds tension well and gives good definition to knots”.  For a fab listing of waxed linen sources check out the BasketMakers list of suppliers.

Comments feed for this article